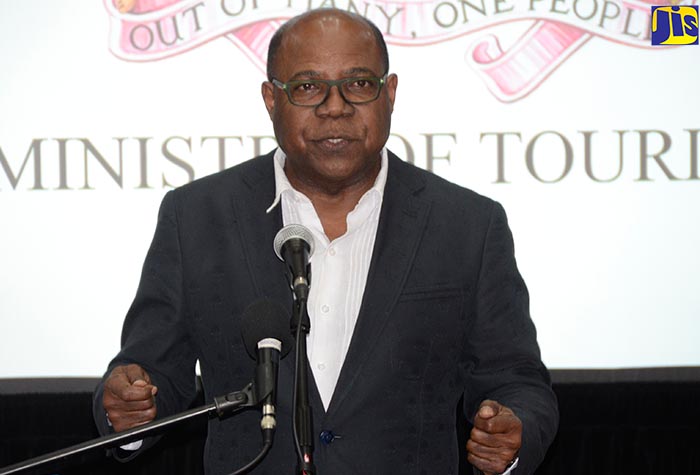 The Tourism Industry Is On Track To Become Jamaica’s Fastest Growing Economic Engagement.

The Tourism Industry Is On Track To Become Jamaica’s Fastest Growing Economic Engagement.

Tourism Minister Edmund Bartlett, says the local industry is on track to become Jamaica’s fastest growing economic engagement.
This, he said, is based on the sector’s significant inflows to the gross domestic product (GDP), and on the fact that its contribution, in the last two and a half years in particular, has grown faster than every industry in the country.

The Minister was speaking at a ceremony to announce the 19 semi-finalists vying for the 2018 Tourism Service Excellence Awards (TSEA), at the Spanish Court Hotel in New Kingston this week.

Mr. Bartlett reiterated that Jamaica welcomed a record 4.31 million tourists in 2018 and generated approximately US$3.3 billion in earnings.

This, he pointed out, enabled the industry to employ 120,000 people directly, and generate another 250,000 indirect jobs.

The Minister further said based on preliminary figures, tourism contributed US$450 million or 22 per cent of the revenue flowing into the GDP, adding that the overall US$3.3-billion visitor expenditure accounted for approximately 50 per cent of Jamaica’s foreign exchange inflows for 2018.

Mr. Bartlett, who noted that the Statistical Institute of Jamaica (STATIN) is still putting together the final GDP figures for 2018, indicated that the equivalent 2017 out-turn showed that tourism’s contribution to the national growth figures increased by 0.6 per cent, moving from 8.4 to nine per cent.

Meanwhile, the Minister said the industry’s growth prospects internationally are increasingly positive and expected to redound to the country’s benefit, in light of the fact that Jamaica’s tourism growth mirrors the growth globally.

This, he noted, is against the background of local and global industry developments over the last five decades, and future prospects.

The Minister said 50 years ago, some 200 million people travelled globally for touristic purposes and spent approximately US$300 billion.

Mr. Bartlett said these out-turns skyrocketed in 2018, which saw 1.4 billion people travelling and spending US$1.6 trillion.

While noting that tourism accounts for 11 per cent of global GDP, second only to the finance and banking industry’s 19 per cent, Mr. Bartlett said the industry represents 30 per cent of trade in services across the world.

Tourism is now seen as the fastest and only industry that has grown consistently for the last 50 years… with projections for more growth in the future, he added.

0
0   0
previous The Economic Progress Made By Jamaica In Recent Times Can Be Used As A Model For Other Countries To Follow
next National Export-Import (EXIM) Bank Of Jamaica Loans To Productive Sector Projected To Increase To JA$9.3 Billion For Upcoming Fiscal Year.